The Impact Of Not Showing Up 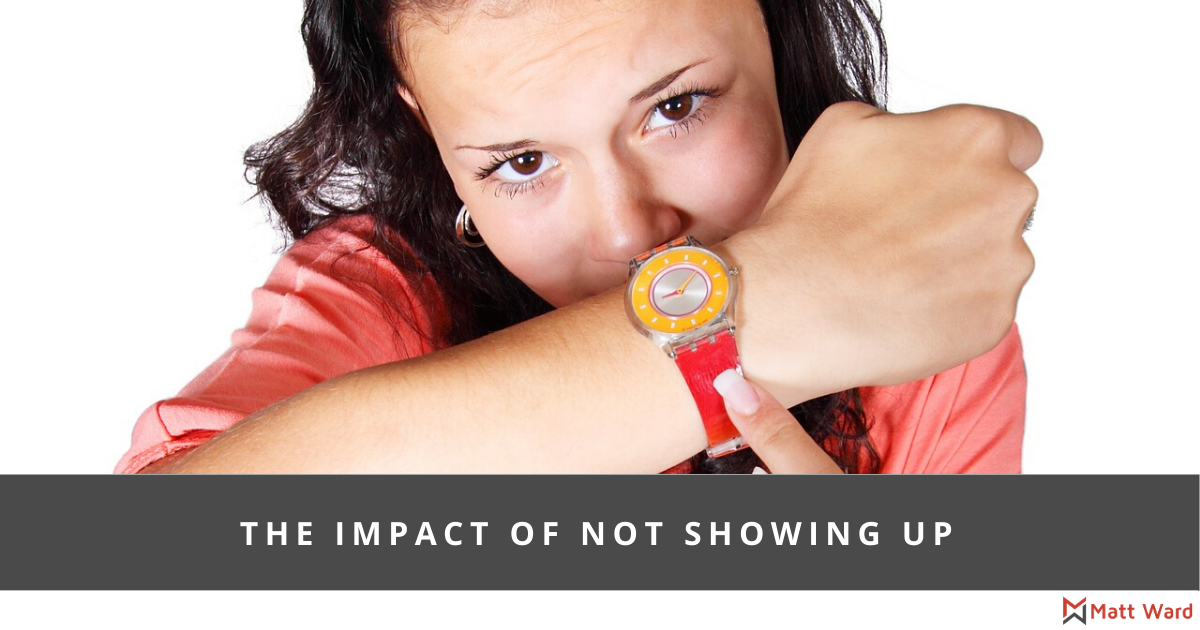 Have you ever had a hunch? You know, that feeling in your gut that something just isn’t right?  Sometimes that happens with me when I make appointments with people. Let me explain.

Recently I was exchanging emails with someone and we agreed to a meeting for 11am on a Monday. There were a total of 4 parties involved in this meeting.

2 out of 4 showed. SO FRUSTRATING!

1 attempted to show up 30 mins after the meeting started, but we had already moved on by that point.

The other party never showed, never emailed, never called, nothing!

I have no idea what’s going on in this person’s life. There could be something very traumatic that has greatly impacted their ability to physically appear on the video conference, or it could have just been a calendar issue.

You’re time is NOT more valuable than mine or anyone else that showed up on time to the meeting.  It’s rude, inconsiderate, and incredibly hurts your ability to get referrals.  Much needs to be done at this point for me to ever build enough trust in this person so that I would refer them.  Furthermore, I’m not willing to put in my valuable time to try to make that work!  There are so many more people in this world that will respect my time and as such deserve my time.

Trust is build over a long period of time. It’s like a bank account, you put small deposits in on a regular basis and that allows you to build up a small savings account that you can pull on when you need to. If you go into the negative early on, you’ve got bank and overdraft fees that makes it much harder to get back to positive. Don’t start your relationships off with a negative trust account.

If you haven’t already downloaded the free resources I have at www.FireUpReferrals.com what are you waiting for? Build your trust bank account by using the 7 ways to build better relationships in under 5 minutes per day. That document along with the Referral Revenue Calculator are part of the Fire Up Referrals Resources!

Until Next Time, don’t forget to
Live Happy,
Smile A Lot and
#High5 Everyone Around You!