Setting Expectations: Why It Matters! 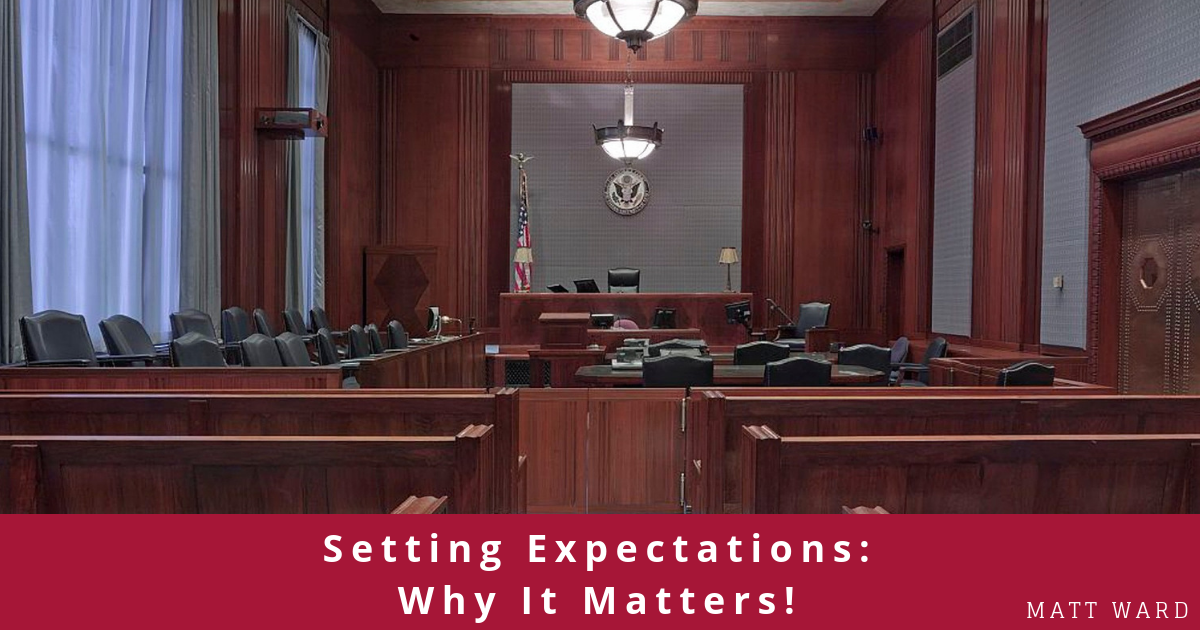 Recently I was called for Federal Jury Duty. I was on standby for an 8-week time frame and I had to call each and every Friday after 5 pm to see if I would need to report for Jury Duty on the following Monday. I called every week, like clockwork.  It was clear what I needed to do, and why I needed to do it. The paperwork provided in advance allowed me to register my email and my phone number so they could communicate effectively with me. When I called, the system recognized the number I called from and then told me “You do not need to report next week, please call back next Friday after 5 pm”.  Great way to communicate. They were able to do this well because they set the expectation up front of what would happen, and what would need to be done on my part.

…as a side note…I think they could over deliver…and surprise if they added: “Now go have an amazing weekend”. Wouldn’t that put a smile on your face if you were the one calling? Technology these days certainly allows for this type of add-on and customization….but I digress!

Then I called at the end of November, and boom…”YOU MUST REPORT TO JURY DUTY AT THE FEDERAL COURT ON MONDAY DEC 3RD, 2018”. I am sure most people would react with “Oh, cmon!”. But not me. I was happy. I feel that it’s a great service I can do as a citizen of this great country, and I have no problem serving on a Jury.  This would be my 2nd jury, provided I get picked to hear the case.

As I drove to the court that Monday morning, I kept thinking to myself, what the day would be like?  Would we simply get dismissed when walking in the door because of a settlement? Who knew.

When I entered the court I was given a paper to complete, then told to enter a courtroom, which to my surprise was full of other potential jurors.  There were about 75 of us. We waited.

..and waited. And waited some more.  The waiting was frustrating! After about 45 mins of waiting in silence (all 75 of us) a court employee entered the courtroom and explained the parking situation and the video we were about to watch, we then watched the video, which took about 15 mins, and we waited some more.

Finally, after a total of 2 hours, we were given some instructions and asked to answer some questions. Then we were told we were going to be moved to another courtroom, and one by one each person would be questioned for the jury selection process.

While waiting for our individual numbers to be called, the jurors began chatting.  The overwhelming discussion point was around confusion. What are they doing? How come some people left and returned while others left and never returned? Why was there a difference in time between juror numbers being called? In some cases they called numbers 4 minutes apart, others 20 minutes apart. The entire process was moving like molasses.  It was confusing and left so much to be desired.

The discrepancy between the juror registration standby process and the actual juror selection process was dramatic. In fact, it was on opposite ends of the spectrum.

Now…to be clear…in no way am I saying that the juror selection process needs to be streamlined or somehow sped up. I believe that all of this can be done through setting better expectations.

The video we were shown was an older video about the jury selection process, how jurors might be chosen and explaining that some jurors are not chosen for other reasons.

What the court could do, is be more clear throughout the process.  Here are a few things that they could have done, without jeopardizing the process or influencing the trial in any way.

These are some suggestions that I thought of during that day and on my drive home. I’m not familiar with the process so perhaps some of these can be done while others cannot, but if you work in a courtroom, perhaps these ideas could start the discussion of what can change to set better expectations.

Here’s what I do know…

Setting expectations, and communicating constantly keeps your contacts and clients in the loop, informed, and results in a closer relationship. Lack of communication allows for a chasm to develop between your business, you, and your relationships.

Set those expectations, communicate often and watch the word of mouth referrals roll in!