No Show – No Trust 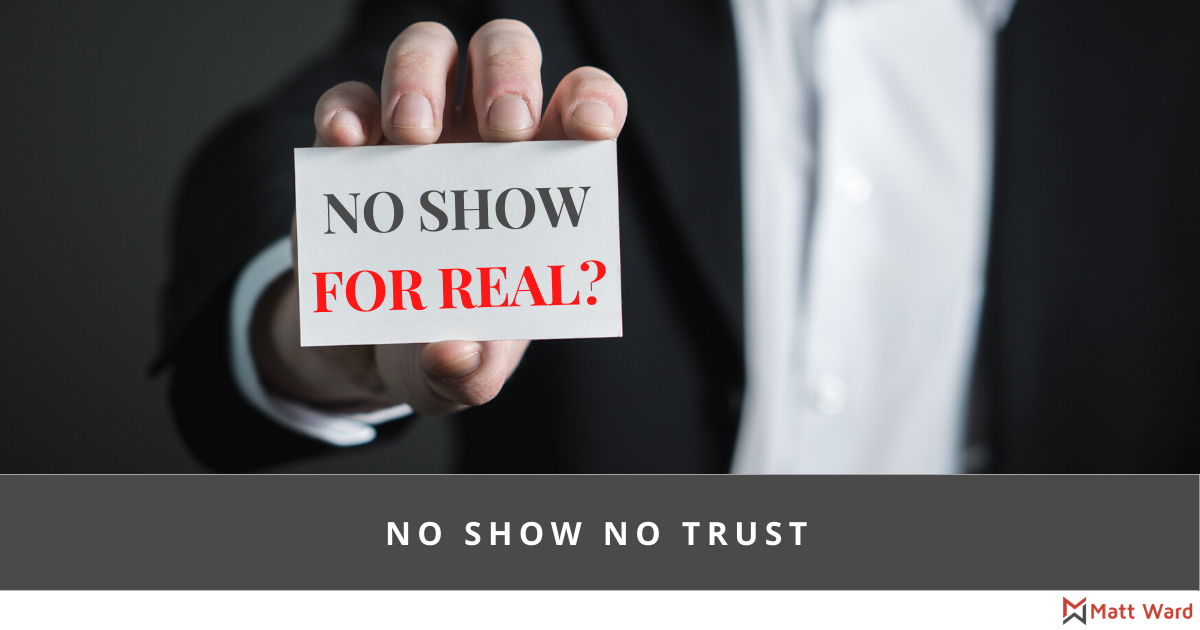 In 1991 I was sitting at the bench in the center of a mall in northern virginia. I was waiting for Jenny, that stunning and very pretty girl I knew from the bowling alley, to finish her shift at the retail store just across from the way. I was also waiting for John to join us. John was coming from home with his car. When she was done with her shift, all three of us were going to her friend Jane’s house to pick her up and we were all going out for a late dinner.

I was 18, and that was my first memorable situation with a no show!  I was so upset with John that he would just blow us off, that I never spoke to John ever again.

Look, I get it. People are busy, things happen, mistakes are made!

I recently sat on a zoom for 30 mins waiting for someone to show up! Now…after 5 mins, I sent an email saying, “Are we still meeting?”. I was clear in that email that I only had the 30 mins available that this person booked in my calendar.  As I sat on zoom I decided to get some additional work done…in hopes that this person would show up.  Unfortunately, they did not.

I’m curious, at what point do you move on?

I’ve had enough of these situations in my life, that I’m now at the point where I’m just done with it. Here’s the thing.

They booked the time with me in my calendar, days, if not weeks in advance. They took that time off my calendar by booking it. A Time that other people could have booked time with me. Then they didn’t show up.

I was very frustrated!

I decided to reply with this:

“I appreciate your interest. To be honest, it’s not a good fit for me.
I have a one strike rule when it comes to booking time with me. I’m sure you understand that your time is limited and valuable. I respect that. My time is very limited and valuable as well.
I wish you the best.”

They then replied and said:
“Matt,
I do understand your point and certainly I respect people that value each other’s time.
I am never late for my appointments, but I work 2 jobs at the same time and the CEO of my company was on a video call with me. It wasn’t meant to be a form of disrespect. With this being said, I’d still be interested in connecting with you, however I get your frustration for this inconvenience.
My very best”

We’ve got to be clear with others, regardless of who they are, that we have things scheduled. Prior to this appointment being scheduled I had no idea that this person had 2 jobs. I understand that if the CEO of the main job was on a video chat, it’s not likely that someone would speak up. But..if speaking up to the CEO is NOT your thing, then send an email letting me know that you can’t make it BEFORE the call starts. I’d still be frustrated but I wouldn’t be nearly as frustrated as I was after the scheduled call time.

My next step was to go to LinkedIn and remove and block this contact.  For me, being stood up for an appointment is a very deep betrayal of trust. How could this person dig out of this hole with me? It’s rare that someone has successfully done that. I’ve given people 2nd chances before in these situations and they never pan out well for me. In fact, what I find is that this is a pattern of behavior that will continue for the foreseeable future.

Trust is everything when it comes to referrals. Without trust, no one will refer you. Sometimes the trust is built immediately and sometimes it’s broken just as quickly.

Start demanding higher standards for yourself and your business partners, and don’t attempt to build relationships with people that stand you up for appointments. That is no way to Fire Up Your Referrals. In fact it’s the opposite.

If you are looking to fire up your referrals in your business then you may want to get hold of the two free downloads I have at www.FireUpReferrals.com