If You Delay You Lose Out 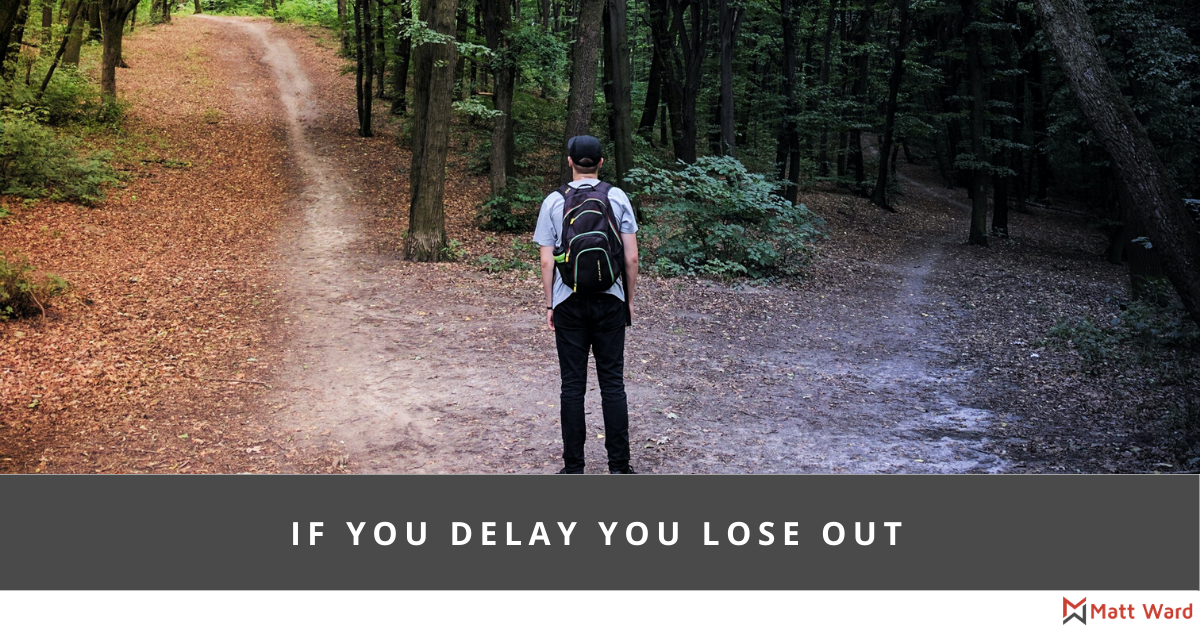 Rewind just 5 days. I was working with a small group of people to create a networking group in Massachusetts. This is a single seat group where only one person from each profession can be a member.

I’ll change the names here to protect the innocent!

As it turns out, Ken was very interested. Ken submitted his application for membership within 48 hours.

John introduced Jane to me because he knew that Ken was going to take the seat and he wanted to be sure that Jane had other options, perhaps other groups to look into.  Jane was very busy and her availability was limited to get on the phone. Here’s how the timeline worked.

Day 2 – Friday – Jane gets introduced to me. Back and forth emails but her window of availability conflicts with mine. We discuss talking on

Day 3 – Saturday – Ken submits his application for membership via email

Day 5 – Monday – Based on previous emails from Friday, I call Jane. She can’t talk and schedules a 7 AM call on Day 6 Tuesday.

Day 6 – Tuesday – She calls me right at 7 AM, we talk, she’s confused that there is no longer a seat available. Somehow, she thought that Ken had passed and was not interested.  I can tell on the phone that she’s a bit perturbed, dejected, confused, and disappointed. She says she’s going to regroup and decide what she wants to do next.

So what’s the lesson here?

It’s simple, and I’ve been preaching this from the mountain tops for 10 plus years!

Had Jane “acted” and attended the Thursday meeting, she would have likely decided to move forward quickly, completed the app and would have the seat. Then I’d be working with Ken to find a seat somewhere else. Instead Jane waited, and she lost out.

Now…this is only a seat in a networking group…what’s the big deal you say? Well…I see this all the time in business. I’ve seen it during COVID-19. Prior to COVID, and I’ll continue to see it post COVID. It drives me crazy.  Business owners are slow to make decisions and act.  They seem to think that they need to analyze things so much to not make a bad decision, but in reality, that alone is a bad decision. They should be deciding much faster, acting much more quickly, and adjusting on the back end to make things fit better.

Had Jane attended the meeting she would have heard me say that she can submit an application, it won’t be processed until the group launches officially in a few weeks. This would have allowed her time to think it over and back out if she had schedule conflicts or business conflicts.  Instead, failing to make the decision to show up, resulted in a cascading effect of outcomes that she was not pleased with.

BOTTOM LINE…MAKE DECISIONS MUCH QUICKER IN YOUR BUSINESS AND YOU’LL OBTAIN YOUR GOALS MUCH FASTER WITH MUCH LESS REGRET!

If you haven’t already downloaded the free resources I have at www.FireUpReferrals.com what are you waiting for? Make the decision now to get more referrals at a higher amount, from better, more deeper, relationships! Don’t delay, make the decision now and adjust later!

Until Next Time, don’t forget to
Live Happy,
Smile A Lot and
#High5 Everyone Around You!