Too Many Cards, No Pockets, and No True Connections 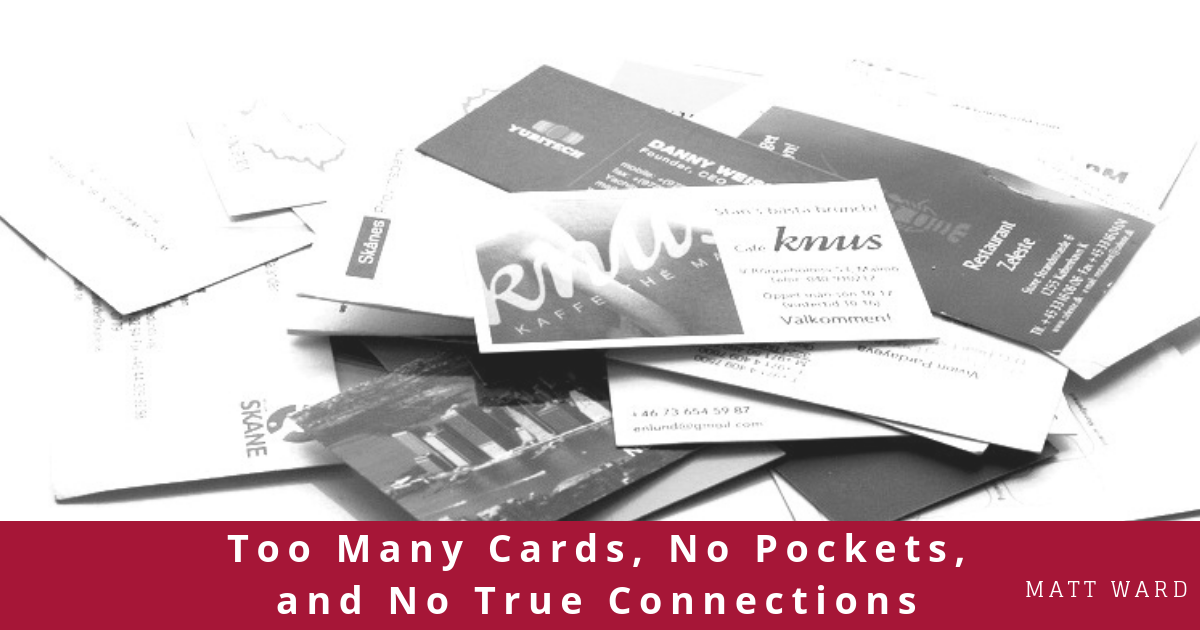 Sean was exhibiting at a trade show back in 2009 when I entered his aisle.  There were about 20 total exhibitors in this specific aisle and Sean was the 3rd one on the left. I specifically remember where he was positioned, because of what occurred next.

Sean was having a conversation with a woman just outside his booth…about 2 feet out of his booth. I believe he was holding this conversation there for a purpose. As I strolled down the aisle, Sean paused his conversation to take a single step forward and extend his hand with his business card.

Sean was in the website business. It was clear by his branding, his banner, and his booth that he was selling websites.  As he extended his card to me, I politely asked: “Why would I need your card?” Now…I get that as you are reading this, that may sound rude, but I assure you it was not communicated that way in person.

Sean’s response was “Surely you know someone that needs a website!”  I was stunned. I paused a minute, collected my thoughts, then pointed directly to my embroidered polo shirt that had my company name on it. At the time my company was called Central Mass Web Design.  I then asked Sean in a very direct way while pointing at my shirt “…and why would I give them your card?”

Since this occurred in 2009, I’ve been on a mission to solve this pervasive problem.

I wrote about this before in my article about How Bananas are the Problem with Small Business.

Connections and specifically deeper more meaningful relationships result in more business. If we are just superficial, collecting business cards to add people to lists and get others to refer us, we will fail…miserably.

After all, would you ever give your friend, contact, or family member a referrable to a company that simply handed you a card?  Referrals are gold. They are the primary thing that small businesses seek and they cost far less than getting new clients from marketing.

When it comes to networking events and tradeshows I see the collection of business cards as a very common mistake.  In fact…there are people that come to tradeshows wearing clothes that don’t even have pockets. As such you end up with Too many cards, No Pockets, and No True Connections.  Don’t let that happen to you!

Stand up for what you believe in….True…Meaningful….Deeper Connections.